It all began with a wish to do something “big” for our 20th anniversary. Bahamas, Jamaica, London, Ireland, a cruise – lots of ideas were tossed around. But with three kids (two who need braces, one going to Europe this summer, Boy Scout camp, etc.) and a full life, those ideas just weren’t practical. With some digging around we finally made our plans for a trip to the Florida Keys – where neither of us had ever been. With the help of family and friends we were able to set aside 5 days (Wednesday thru Sunday) for our adventure. 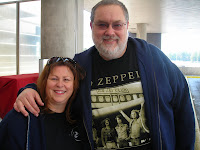 It began on Wednesday, March 4th. Ivan’s mom dropped us off at the Greensboro airport at 1pm. We had plenty of time to get thru security and then “wait” for our flight. The TSA guards liked my “24” shirt and Ivan’s Led Zepplin t-shirt got plenty of smiles. Right on time at 2pm we boarded our flight on US Airways for Charlotte. It had been two years since we had flown (New York/Israel) so we were a little rusty. However the flight was quick and smooth and we settled into the Charlotte airport to wait for another hour for our next leg of the journey. Once again boarding went right on time and we got on the plane for our flight to Miami. The journey was fine, though I did sit beside a “young Republican” (I say that because his Blackberry had a picture of George W. as the screen saver) who promptly got sauced drinking three Vodkas during our 1 ½ hour flight. He was very polite though as was his friend across the aisle who was traveling with him. We debarked without incident and picked up our check bag and made our way to the rental car shuttle. Five minutes later we were at the rental site where I promptly got yelled at for taking pictures inside the waiting area (trade secrets?). We picked out our midnight blue new Chrysler Town and Country minivan (I KNOW we didn’t have the kids with us – but we like driving minivans!), plugged in our GPS we had brought from home, and attempted to get out of Miami. A couple of wrong turns and searching in the dark, we were finally on the right road. A stop at Subway for sandwiches and CVS for sodas and we were on our way. Driving in absolute darkness we had no idea of the beauty we were missing and what we were getting into. We stopped at a grocery store on the way to pick up a few breakfast supplies, and then back on the road. At 9:55pm we pulled into the Lime Tree Bay Resort on Long Key. Getting our keys we made our way to the room and wondered if we had made the right choice. We wandered around in the dark a bit with the flashlight trying to see what we had done, but finally gave up and went to bed. 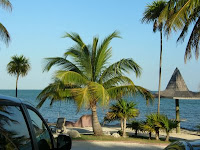 The next morning after a good night of sleep we got up, opened the door and found a beautiful sight. On the other side of our parking space there was a small beach area and then the bluest water we had ever seen. While our room and hotel weren’t exactly what we had thought they would be (more of a motor lodge that happened to be on the Gulf of Mexico than the “resort” on the website) – the view was absolutely beautiful. We had some breakfast and got in the van to drive to Key West. The weather was perfect, mid 70’s and breezy and the sun was bright. Alternating bridges and “keys” (islands), 68 miles later we were at our destination. Driving thru the ‘new’ section we drove down to Duval Street and then managed to find a parking space on Whitehead, just two blocks from the Southern most point in the United States. We wandered around a bit and then settled on a place to eat lunch – the Square One Café. Seafood and Key Lime pie were in order (found out real key lime pie should always be yellow – NEVER green). A bit of shopping and then we joined a trolley tour that took us all around the island and gave us a bit of history. A couple of hours later we were back at the van and ready to drive to Long Key. Stopping at Bahai Honda Key State Park we walked out on a pedestrian bridge made on the old Flagler railway and then on the shore and got our feet wet (very cold!). Then we drove to a place on Marathon Key that had been recommended for dinner – but left after half and hour and no service. Instead we at a local restaurant (on Marathon) called The Cracked Conch. No atmosphere, but excellent service and good food. More seafood of course and we tried “conch balls”. They were kind of like crab cakes in huge hushpuppie form but made with conch of course instead of crab. They were okay and we liked them alright – but not a new found love. Once again in the dark we made our way back to our hotel and collapsed into bed. 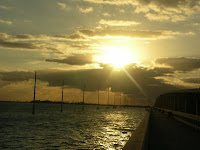 Friday morning we awoke with the vague idea of trying to see the sunrise. Of course we were about half an hour late, but that didn’t stop us from throwing on some clothes and hopping in the van to drive to a good spot to park and watch. A couple of miles later at a fishing bridge we watched a slightly overcast sky obscure the sunrise, but found beauty in it anyway. Back to the room where we ate breakfast and got ready to go out once again. This time we headed 30 miles north (actually east) to Key Largo for a ride in a glass bottom boat. Docked beside our boat was the original African Queen from the Humphrey Bogart/Katherine Hepburn movie of the same name. 10am found us headed seven miles out to sea – our destination was the Molasses Reef. Ivan and I stood in the front of the boat enjoying the breeze and sea spray, that is until the sea got very choppy and suddenly we were going up and down and up and down – I didn’t feel too good. As we reached our “spot”, we headed inside to look down the glass bottom and enjoy the coral reef. Ivan did – I didn’t. Much to my dismay I found myself seasick and sat on the side bench with my eyes closed most of the time and praying I wouldn’t embarrass myself. Ivan took lots of pictures for me to look at later. Fortunately as we made our way back to smoother sailing and then the dock I felt better and better. By the time we got off I felt fine. In fact we left there and went to lunch at Mrs. Mac’s Kitchen. Mrs. Mac wasn’t there (she went to bike week at Daytona Beach), but we enjoyed the best fried fish basket ever and of course more key lime pie. Souvenir shopping came next and then we headed to the “beach” at our resort to layout and enjoy the sun. Tried to swim in the pool, but it wasn’t heated and was absolutely freezing (just 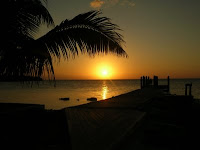 like the sea which is why Ivan decided not to snorkel). So lounged around by the pool and then in hammocks. A few hours later we watched the most incredible sunset we had ever seen. Breathtaking. We had dinner at the only restaurant on our key – Little Italy. We would not recommend it, very disappointing. Back to the room for our last night, packed up and got ready for the next morning.

Saturday morning we drove to the Everglades National Park. Pulling into the visitor center just outside the park at 10:05am we discovered there would be a ranger led walk at 10:30 at the next visitor center just a few miles away. Back in the van we went, entered the park and headed to the Royal Palm Center. Just in time we joined in a tour with a volunteer guide (Gregg – a retired New Jersey homicide cop). 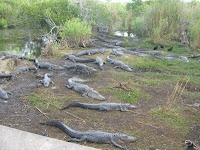 We walked a short trail but saw more birds (mostly various kinds of herons) than ever and most amazingly over 40 alligators sunning themselves – gathering their body heat and energy. We had a great time doing this and highly recommend it to anyone headed that way. A couple more stops in the park and then we left. At this point we weren’t sure what to do. We wanted to ride an airboat, but time was marching on. We checked out one place that was only a couple of miles from the entrance to the National park, but didn’t get good “vibes” – so we left. Ate lunch at a little roadside grill and then decided to go for it – driving on to Gator Park for our airboat ride. Sure enough, it was just enough to give us a thrill. With a skipper with a voice like cigarettes on steroids and a controlled wild streak –we were off. New regulations kept him from going over 30 mph, but it was enough! What fun we had skimming thru the water and going sideways and looking at a couple of alligators along the way. After that was an alligator wrestling show and Ivan held a young one. Finally at almost 5pm we left the park and headed to Riviera Beach to our motel where we had reservations. We made good time and checked in at a decent hour and explored a little. We discovered it wasn’t like Myrtle Beach where there are plenty of areas you can see the beach from public access and such – almost all residential and closed off. So we found a place to eat (a delightful fast food Caribbean place called Pollo Tropical –try it if you get the chance) and then got back to the motel where we changed the clocks and headed to sleep.

Sunday morning we ate a light continental breakfast and then easily drove to the Orlando/Sanford International Airport. Turning in our car was much quicker than anticipated and we wound up with a little over 3 hours to wait in the airport. But that was fine, we had plenty to read and time passed easily. Our plane was about 15 minutes late, but it was a great trip on Allegiant Air. When we checked in Ivan was asked if he wanted an exit row seat to have more room and he said yes. We had no idea it would mean that he could actually stretch his legs out all the way – a new experience. We were back in Greensboro at 7:11pm where Ivan’s mom and our daughter Emma were there to pick us up.

It was definitely a good time and I am very glad we went. Our next goal is an Alaskan cruise for our 25th!