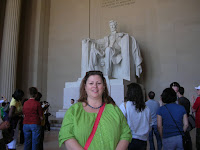 One of my favorite places to be is standing just inside the Lincoln Memorial with the columns behind me and the statue in front of me. No matter how warm it is outside, inside the memorial it is always cool. In spite of the crowds of people, there always seems to be a hush. I know people around me are using normal tones – yet it all seems to fade away.

The first opportunity I had to visit was at the age of 27, nearly 28. A weekend trip by myself, I stood in amazement in my nations’ capitol. All the places I had seen in pictures, on television, and read about in history books were suddenly alive and real. I wept at the Vietnam Memorial, my heart beat fast at the White House, the height of the Washington Monument was bigger than life, the energy of the city both scared and excited me. But at the Lincoln Memorial there was a sense of peace and sorrow, yet hope and promise.

The next time I visited was only six months later, on my honeymoon. I was surprised to once again weep at the Vietnam Memorial, the energy of the city was invigorating, but the same sense of peace and hope, sorrow and promise was at the Lincoln Memorial.

It was ten years before I went back, in spite of only living five hours away. By that time I had two children and a third one on the way. My husband and I went for our 10th anniversary, without the kids. We saw things we hadn’t seen before, but headed back to the familiar monuments as before. I wept again at the Vietnam Memorial as I pondered the names and saw injured veterans go by. It was a place of sorrow and loss, with no hope, no victory. But I found refuge once more at the sight of Lincoln sitting in his chair so stately and calm. While he oversaw the nation thru great sorrow, his Gettysburg address carved in the wall to his right gives much hope. Tears spilled from my eyes in some sort of unexplained emotional reaction.

Three years passed, and this time the trip to D.C. was made with three kids under the age of 10 and a mother-in-law recovering from shoulder surgery. The monuments and museums became teaching moments, without the luxury of studied contemplation. Yet as we made our way once more to the Vietnam and Lincoln Memorials, my emotions rose to the surface. 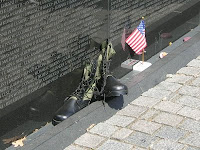 The children were quiet as we walked slowly past the long black wall of engraved names at the Vietnam Memorial. They whispered questions about the notes, the flowers, and mementoes they saw had been given. I was thankful for my sunglasses as they hid my tears and gave me opportunity to pull myself together to answer. But as we made our way up the steps to Lincoln my hope returned and my tears were sweet instead of bitter. Standing again in the vast room, peacefulness descended and I was comforted.

Seven years later at the age of 48, I stood on the grass in the mall in January and attended a presidential inauguration. The opportunity to see democracy in action was moving as I witnessed the smooth transfer of power in peaceful harmony even though an opposing party had been chosen. It was a tremendous time, and yet I felt something missing. The Lincoln Memorial was softly called to me like an old friend, but I missed it.

Gratefully I came back to the city with my husband and family on Spring Break (and celebrating our 20th anniversary). Being practical we divided the chosen sights to see in half by location – the Capitol Building and museums on the first day and Memorials and Monuments the second. All thru the first day, even while enjoying it all, I longed to stand in front of Lincoln once more. 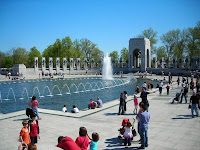 Finally the next day came and after an unexpected morning in the National Gallery and a much appreciated taxi ride – I was finally there. I found my nine year old daughter next to me holding my hand at the sight of Lincoln’s great statue. I tried not to influence her first impressions, but my love for the place was evident. Stepping just inside the columns I once more felt the cool refreshing air caress my skin and felt my spirits lift. Still mindful of teaching moments my husband took the time to express the impact of the memorial on many people. While grateful, I was restless – I wanted to be left alone just to stare at Lincoln’s face and feel the peace that comes with being there. Tears welled up within. It was the same place of peace and hope, sorrow and promise that I remembered. I spent as much time as I wanted there, no rushing from this one. The Vietnam Memorial followed, and the sorrowful weeping came once more. It was still a place of sorrow, without hope. This time however, the journey was not done – we made our way to the other end of the reflecting pool to the WWII Memorial, a new experience for us. 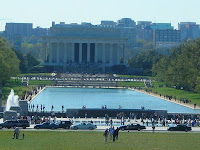 Here there was sadness for the lives lost also, but a sense of pride and victory was the pervading atmosphere. Here we had made a difference. I looked down the reflecting pool to the Lincoln Memorial at the other end – and life felt in balance.

The Lincoln Memorial holds a special emotional power for me. It makes me stop, be quiet, and reflect. I see the ability to show peace during times of conflict and strength during times of uncertainty – and I am encouraged.