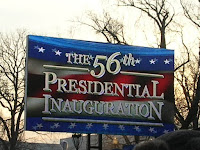 My brother and I quietly conversed as people around us sat and anticipated the day to come on the train into D.C. We disembarked at L’Enfant Station. At 6:30am we were standing at the corner of 7th Street and C Street. Looking to my left up 7th Street, I was astonished to see the street full of people walking toward the National Mall. Volunteers with red caps directed us to the designated gate. Swept up into the broad line, we found our spot and “stayed”. Conversation was easy amongst strangers, all here for a historic event, the changing of the presidency. I found myself, a 48 year old white female, in the minority, the group was 90% African American, but I felt no distance, no gap, no racial divide. Watching, daybreak slowly dawned with faint lines of the sun coming out off to the right of the Capitol Building. Around 7:15am we were told to get our tickets out. We held them high as we were directed toward the security tables. I held my arms out as the female security guard patted me down, and then I was thru and into the National Mall in the designated Silver Ticket Standing Area. Settling about 30 ft in front of the Mega Screen on our right and a view of the Capitol on our left, we began to wait. Once again conversations were easy with a more diverse crowd this time. Black, White, Asian, young, old, fathers and sons, mothers and daughters, husbands and wives, families, teachers and students, the identities were as varied as the faces I saw. As images started on the screen of people inside the Capitol Building, celebrities being seated, or cars arriving with important guests, cheers began. Excitement built as everyone anticipated the ceremony’s start. As 11:30am approached, partisan feelings began to mount (I suspect it is the same whenever a “new” party takes control). People around me began to cheer for any Democrat and boo for any Republican. The few voices that protested were ignored. I became distracted, feeling like I didn’t belong. 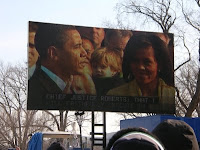 Though I am a registered Democrat and did vote for Obama, I do not regard him to be the Savior of America, nor do I agree with all of his policy ideas (I am pro-life and for smaller government in general), I simply made my choice after much thought and prayer (much to the dismay of many). I was glad to be here, but soon realized that I didn’t care about our new presidents racial identity. What I cared about was being there to see our country’s democracy in action, seeing the transfer of power done smoothly, orderly, and with dignity, ceremony, and freedom. The disappointment in the people around me faded as I focused on that. When the day was done, I was proud to have been a witness to one of America’s founding principals – the right to choose our leaders. January 20, 2009 was historic – democracy lives on.