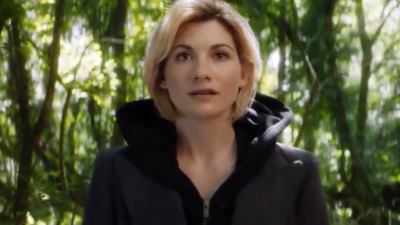 I confess, I’m a little bit mystified at the reaction to the announcement that the new Dr. Who is a woman. I saw the trailer and thought, “cool”, though I admit I haven’t really watched much Dr. Who since the Tom Baker days (Doctor #4), but I didn’t expect the expressions of relief, victory, vindication, glass ceiling is broken, etc.

I grew up in the 60’s and 70’s. I was used to strong female role models in the entertainment world. There was Barbara Stanwyck playing Victoria Barkley on Big Valley running the family ranch after her husband’s death. Then there was Lt. Uhura as part of the bridge crew on the Enterprise “going where no man had gone before”. I wanted to grow up to be Marlo Thomas in “That Girl” and longed to throw my hat in the air with Mary Tyler Moore in Minneapolis. Lynda Carter as Wonder Woman, Lindsay Wagner as The Bionic Woman, and JoAnna Cameron as Isis were strong, get rid of the bad guys, I can hold my own with any super hero on the block characters that boys and girls both liked to watch.

In the “real” world, there was Golda Meir who had been Prime Minister of Israel for longer than I had been alive, Jane Goodall who knew EVERYTHING about chimpanzees and was famous for it, and Barbara Walters who everyone wanted to be interviewed by.

I never once thought there was something I couldn’t achieve, if I wanted it enough, just because I was a woman. That’s not to say there weren’t people who thought women shouldn’t do certain things, but we just didn’t pay attention to it.

Am I glad they made the Wonder Woman movie this year and it did well? Yes, it was a great movie. Am I glad the thirteenth Dr. Who is going to be a women? Since I don’t watch it I admit I don’t really care.

I’m glad little girls and women around the country are happy about these “new” developments – but I’ve been watching strong women all my life.